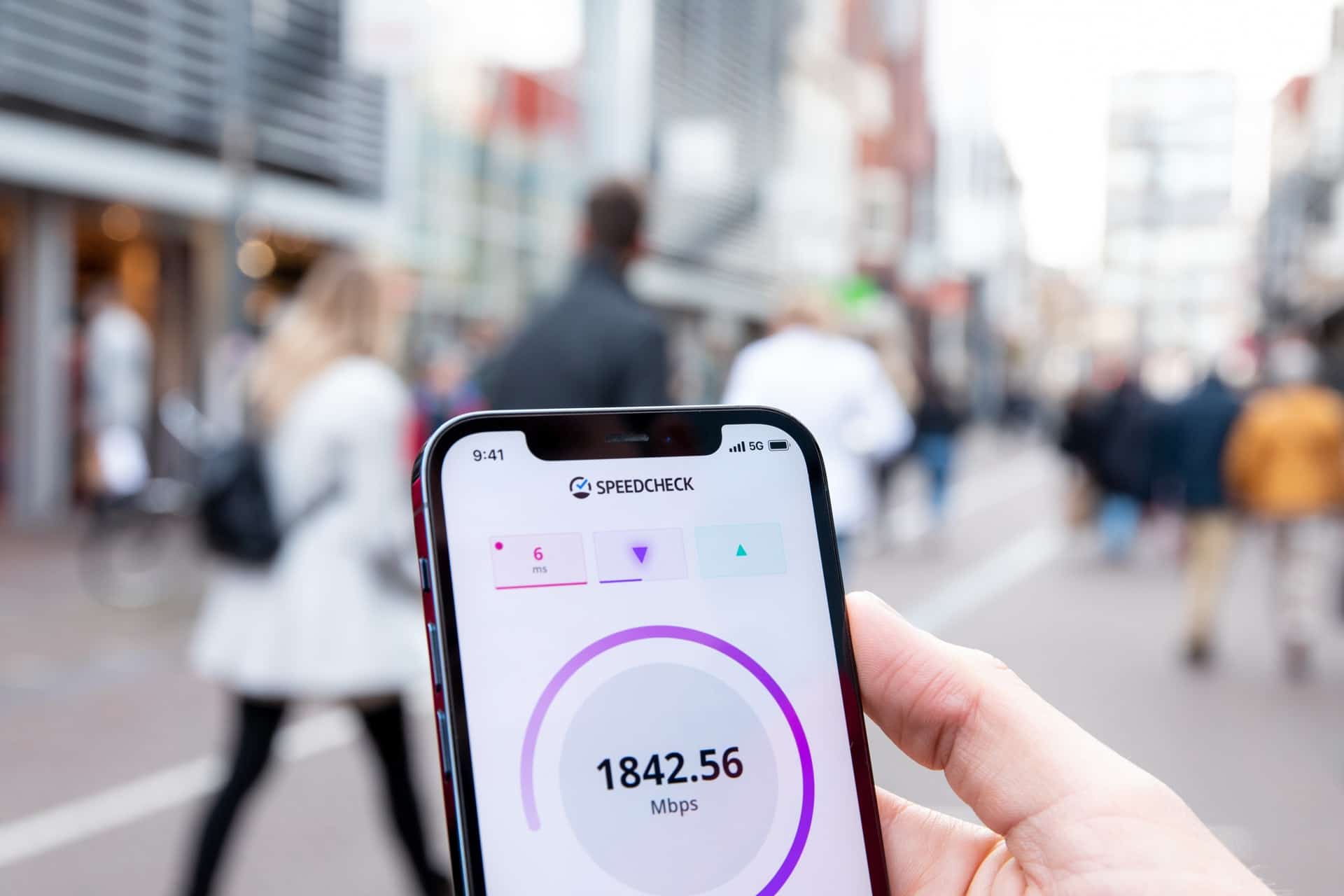 You are paying more than you should!

A chart released by consultancy Tefficient makes the Canadian situation appear even worse than it is. It led me to the conclusion that if you haven’t updated your cellular plan in Canada since 2018, you should do it now.

However, the three main carriers all agree that Canada has some of the best high-speed mobile services in the world, which is correct. Most metropolitan customers can download at 100Mbps or faster on two of the three countrywide networks, which are solely 4G-LTE networks. They further argue that because Canada is so large, what we’re paying is essentially the cost of their comprehensive insurance.

Tefficient’s graph shows that Canada’s data prices are alarmingly out of step with those in every other country it looked at, including the United States. 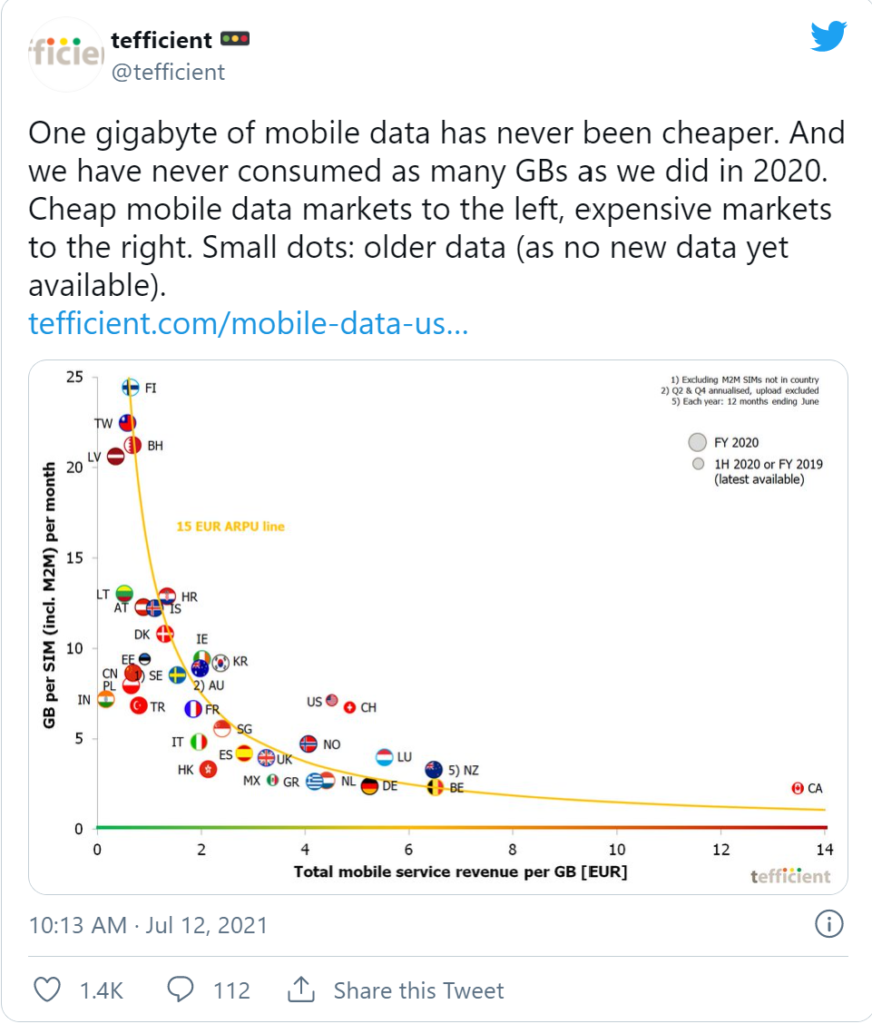 The introduction of Rogers’ “Infinite” plans in the second half of 2019 resulted in a significant shift in the value of higher-end wireless contracts. The Infinite plans advertise “unlimited bandwidth,” but they’re actually “huge gig” plans, in which you get a massive gigabyte bucket and then have your speeds severely throttled. 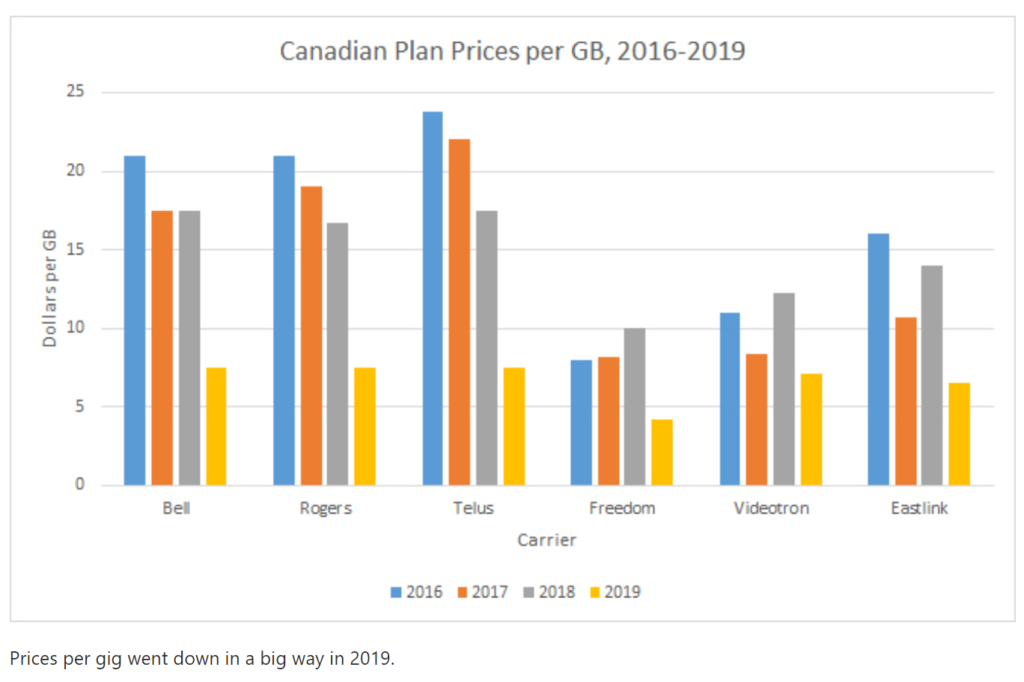 Rogers, Bell, and Telus have altered their pricing strategy, with new plans that contain greater data packs for comparatively lower prices. The rise of massive, unlimited data plans from Canada’s three largest wireless operators has resulted in a significant reduction in the cost of large data packs. Smaller, more modest options, on the other hand, are now more expensive.

All three major Canadian carriers now provide 5G service (as of June 2020). Hundreds of new Canadian markets are projected to be added by the end of the year, despite limited availability.

When compared to the US

It’s not a figment of your imagination. Canadians do pay a higher price than their American counterparts. Even the most basic talk and text plans are more expensive in Canada when compared to the States. In the United States, adding mobile data can virtually quadruple the cost of comparable plans. 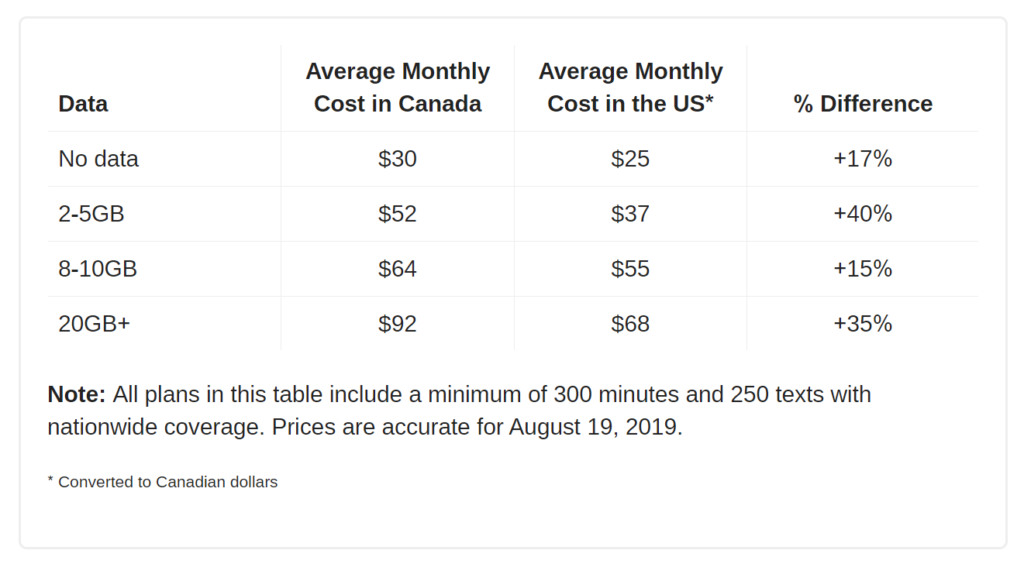 In Canada, the most often advertised plans typically provide 4GB to 8GB of data. There is the least pricing discrepancy in these plans because they are the most competitive. However, since Bell, Rogers, and Telus no longer compete in this market, these low-cost plans have risen in price in Canada while dropping in price in the United States.

Wireless customers in Canada have been conditioned to seek out WiFi, limit their media streaming, and keep their data rates low. When compared to the United States, the average Canadian consumes less than 2GB per month, but plans tailored for these frugal customers are excessively costly.

The same can be said for really large data plans. If you listen to music or watch videos every day on your commute, your monthly data usage can rapidly reach 20GB. At that price point, you’ll soon find yourself paying 35% more for your data than Americans. New 20GB plans from the three major national networks have narrowed the gap between Canada and the United States in terms of huge data plans.

When it comes to unlimited data plans, Canadians are used to the idea of paying overage charges as a monthly tip to the carrier providers.

Unlimited data is available from six carriers, including Rogers, Bell, and Telus. Their plans provide full-speed data with a cap. When you reach that limit, your data will be slowed for the rest of the month. Download speeds can be as low as 64kbps, which isn’t fast enough to listen to music online.

However, in the United States, unlimited plans provide extended full-speed data and only slow down your speeds when the network is busy. Major carriers will even guarantee you a certain amount of high-speed Internet. You won’t be slowed down even if there’s a lot of traffic on the network until you’ve reached your data quota. Each month, this can range from 20GB to 75GB of guaranteed high-speed data. 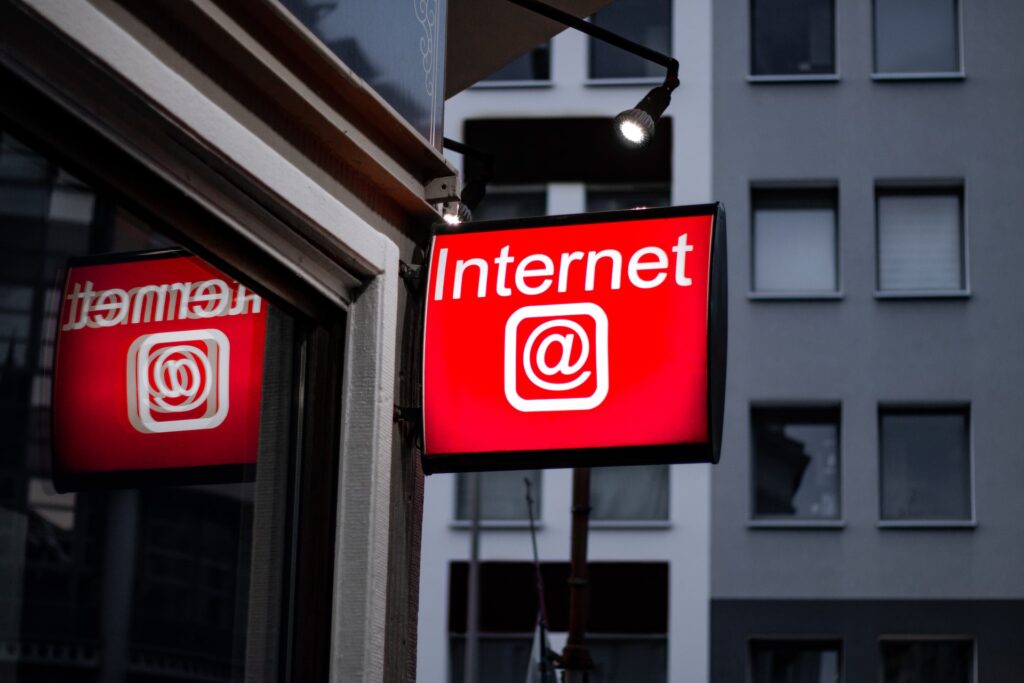 Bring your own phone

Many people in Canada are unable to acquire better rates due to three factors.

So, why do Canadians have to pay such expensive rates for cell service? The answer will very certainly irritate and frustrate you. The National Post stated in 2017 that carriers charge exorbitant prices for their plans merely because they can. Here are some major conclusions from the current situation of the Canadian telecoms industry:

You’ll be doing yourself a disservice if you don’t consider the benefits of switching service plans or even providers right now. All Canadian phones are compatible with all of the major carriers’ 4G systems, so using your old phone shouldn’t be an issue, or buying a cheaper used phone and you’ll be able to save money by opting for the “bring your own phone” option. Just go for it. 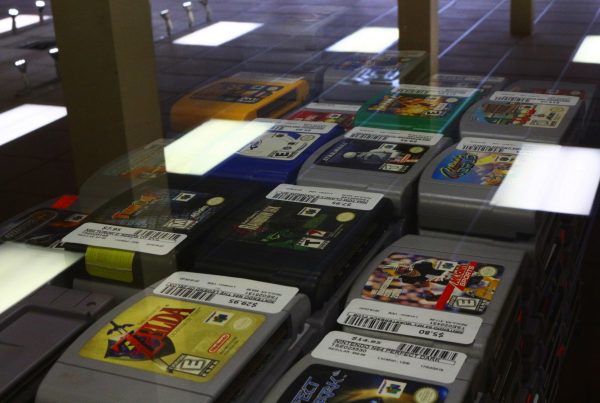